The History of Gear: Warmlite 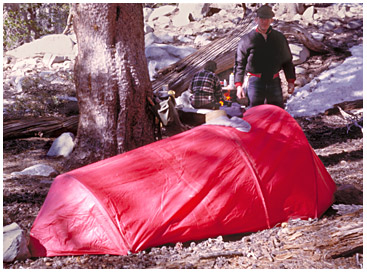 The History of Gear: Warmlite

“Before the Ultralight Revolution there was Jack Stephenson”

PACK INNOVATOR— I have laid before me on the table a simple black and white photograph of a young Jack Stephenson wearing a shiny, unorthodox hip-carry frame pack in about 1957 (for historical context, 1957 is the year when a young climbing bum named Yvon Chouinard started selling climbing gear out of his beat-up old car in Yosemite).

TENT INNOVATOR— Near the 1957 pack photo, I have a Kodachrome slide dated 1961 that documents a definitely non-A-frame tent of Mr. Stephenson’s manufacture made of bright red lightweight nylon (see image). I have an even earlier picture of the Model 1, “Original Filmgap tent,” dated 1958…. Both the pack and the tent design were fully functioning and for sale many years before other companies brought these innovations to the camping public.

2 thoughts on “The History of Gear: Warmlite”